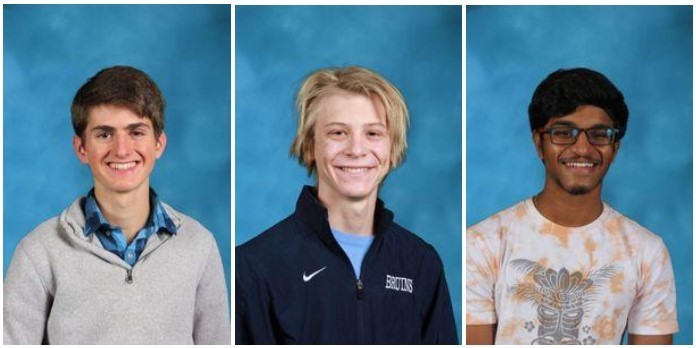 Morgan King is the son of Leslie and Nathan King. He is a member of the National Honor Society, varsity cross country and track, orchestra, Student Council, and is the founder and President of the Math Club. Morgan is an AP Scholar with Distinction. Outside of school, Morgan is involved in service with the Church of Jesus Christ of Latter-Day Saints and the U.S. National Chemistry Olympiad. In his spare time, he likes to run, go on long bike rides, read classics, and play word games. He is currently working as a cybersecurity intern at ConocoPhillips through the BHS intern program. Morgan hopes to compete in a triathlon and a marathon with his dad this year. After he serves a two-year mission, he hopes to major in nuclear engineering, with a focus on nuclear fusion research.

Charlie Olsen is the son of Becky and Brian Olsen. Charlie is involved in cross country, orchestra, track, National Honor Society, BHS Green, Spanish Club, and Math Club. Outside of school, he is in the youth group at St. Luke's and teaches swim lessons with the Splashers program. Charlie enjoys running, playing chess, biking, and card games. Charlie is also in the U.S. National Chemistry Olympiad and plans to study mechanical engineering in college.

Tarun Vinodkumar is the son of Surekha Parankusam and Vinod Kumar. He is a part of the National Honor Society, BHS varsity wrestling, Math Club, BHS soccer, center snare as the drumline section leader, marching band, percussionist in the concert band, and Student Council. Outside of school, Tarun spends his time with Boy Scouts, club soccer, and is an active volunteer in the Bartlesville Indian Association. In his free time, he enjoys playing sports, creating music with the band, volunteering, hanging out with friends and family, and traveling. Tarun is an AP scholar and an Eagle Scout. He is currently working as an intern at the Ascension St. John Jane Phillips hospital. After high school, he plans to pursue a biomedical engineering degree before going into medical school and becoming a doctor.

NMSC, a not-for-profit organization that operates without government assistance, was established in 1955 specifically to conduct the annual National Merit Scholarship Program. Scholarships are underwritten by NMSC with its own funds and by approximately 400 business organizations and higher education institutions that share NMSC's goals of honoring the nation's scholastic champions and encouraging the pursuit of academic excellence.